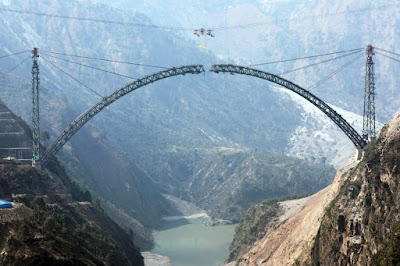 The Chenab Bridge is an Indian railway steel and concrete arch bridge under construction between Bakkal and Kauri in the Reasi district of Jammu and Kashmir in India. When completed, the bridge will span the Chenab River at a height of 359 m (1,178 ft) above the river, making it the world's highest rail bridge. The height of Eiffel Tower in Paris is 324 metres.

Calling it an infrastructural marvel, Union Railways Minister Goyal shared a photo of the highest railway bridge in the world. The arched structure will connect Baramulla to Jammu via Udhampur, Katra and Qazigund with a travel time of six and a half hours. For the first time, self-compacting concrete is being utilized for filling steel boxes as well as for ends of plate girders. The steel plates for the project have been procured from the Bhilai plant of the Steel Authority of India. Chenab bridge set to be completed by Dec 2021.

WSP used BIM to design the tallest and longest-spanning arch railway bridge in the world. It contains approximately 25,000 tons of steel. Built in an earthquake prone Seismic Zone IV, seismic analysis has also been carried out by various IITs. Reportedly, the bridge will be able to withstand earthquake forces up to Seismic Zone V. AECOM is proof checking the design and drawings as well as providing supervision and technical guidance at site for design and construction.

It is being said that the PMO and Railway Board directly monitor the work progress of the project every day through “electronic eyes”. Even if the CCTVs go off for a minute, Konkan Railways gets a call from the PMO. Being declared as a national project, the project has been fully funded by the Centre.